Celebrity homes in Florida concentrate mostly in Miami. It is so because, first of all, Miami is the center of the state. Moreover, it comprises a huge variety of luxurious amenities which are usually used by celebrities. We also can mention that Miami often becomes a place where a movie is shot or some TV show is prepared. And, of course, Miami is just a nice a beautiful city offering perfect climate conditions for its permanent residents and visitors from all over the world.

Famous houses in Miami have become a place for sightseeing for many tourists. We are sure that people seeing their favorite actor or singer on the screen are willing to see at least the outer view of the house this person lives in and spends their time. Miami celebrities don’t hide the places they live in; they just install security systems and hire guards in order to keep their and their family’s safety and get away from harsh paparazzi. Sometimes the security system turns celebrities houses in Miami into castles.

Celebrity houses in Miami are also a good element showing the design tendencies. Even though many houses were built some decades ago, they are often redesigned and supplied with modern features. Moreover, they have become a living magazine showing the most up-to-date interiors of various styles. In addition to a unique design, a celebrity house can obtain some popular or not so popular works of art since celebrities usually have enough money and taste to buy them and like to decorate their houses.

We also have to mention that celebrity homes in Miami are sold for years. Nowadays their price usually starts from about $4,000,000 and rise up to $20,000,000 and higher. It is very rare but it can happen that the price will be around $2,000,000. Moreover, the prices change every year, so many houses can’t be sold even for a decade. Sometimes celebrities manage to stop selling because they change their mind and want to keep it for themselves.

Furthermore, it’s a wide-known fact that in Miami Beach area celebrity homes aren’t usually permanent residencies. Since celebrities have to work a lot in various places, they often have two, three or more residencies in different parts of the country. It can be the reason why celebrities don’t care so much about their residence when they want to sell it – they are used to live for several houses and can buy some estate according to their working process and their family activities. 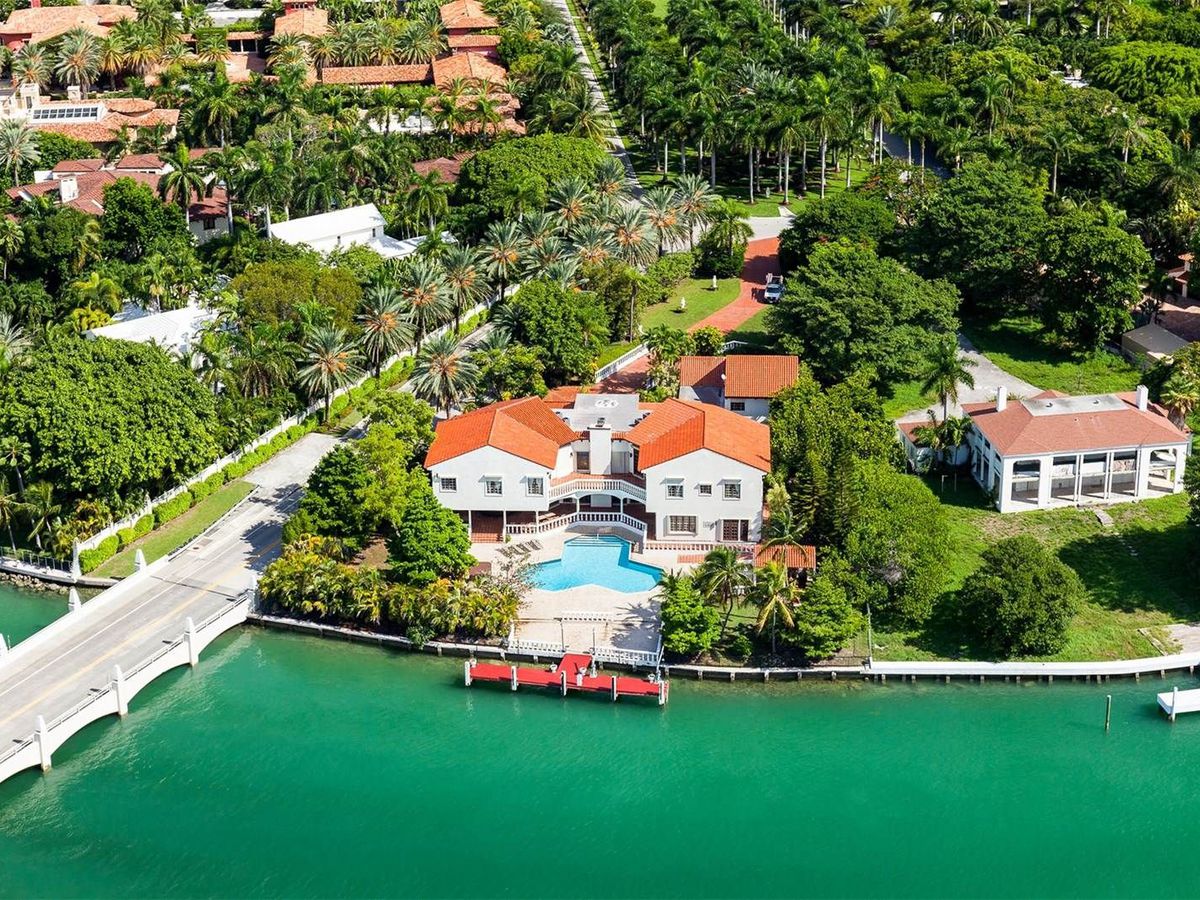 Miami happens to be a famous place of living among celebrities. They love Miami but are very selective when it comes to a neighborhood. Of course, there have been formed several areas where they choose to live. The celebrities choose a neighborhood according to its features: the location, the coast, the convenience to get, the nearby amenities and even schools if celebrities have children. The most favorable neighborhoods are the following:

This place is perfect to start our list. It includes just 34 houses, but they are the most exclusive ones not only in the US, but in the world. A passer-by can enter Star Island only after going through the guard gate. On the island live such celebrities as Shaquille O’Neal, Julio Iglesias and others.

This neighborhood is friendly for pedestrians. Most celebrities like to buy their second or third house there, but there are no giant mansions in South Beach. The area is also famous for its nightlife.

It’s a barrier island with the highest per capita income in the whole country. The island offers various types of residencies for every taste. It’s also full of different amenities. Such celebrities as Jim Carrey and Oprah Winfrey live here.

Although the neighborhood is not so exclusive itself, it has a lot of amazing amenities in the surroundings. It’s also famous for its marvelous schools.

The third island in our list acquires amazing houses with swimming pools, giant outdoor spaces and other luxurious features. There live such celebrities as Anna Kournikova, Enrique Iglesias and others.

The neighborhood happens to be one of the most expensive in Miami. It has amazing amenities together with the close access to the airport, to downtown and to the best places in Miami. Key Biscayne is also enjoyed by business executives.

In this review we would like to show you some of the most marvelous celebrity houses in Miami. 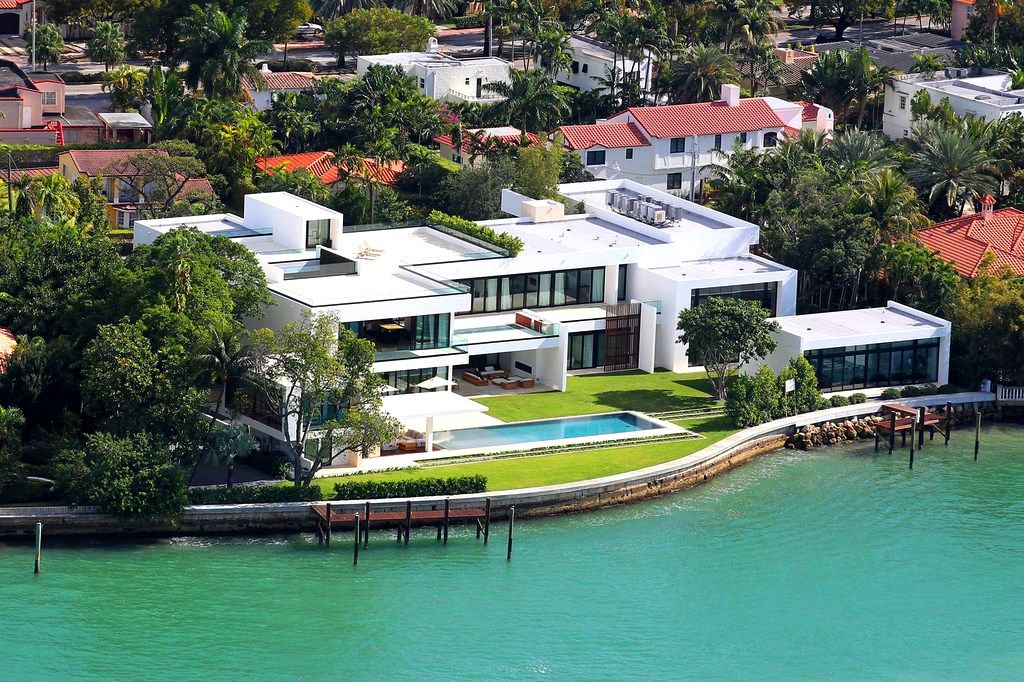 In Miami celebrity homes can be paid some more attention since, first of all, they are tremendous themselves because of their outer view and their location. Moreover, they usually obtain the interior design provided by a famous Miami orf the US designer. Celebrities also like to keep some works of art at their homes, which adds to their mansions a flavor of a museum or a gallery. And, of course, the house can show the character of your favourite celebrity since the designs differ from each other very much, and the exterior and interior is chosen by a celebrity according to their wishes.

We think that you’ve already learnt that there are many celebrity homes and mansions in Miami. We can’t describe all the famous homes located in Miami since you will easily become bored. We want to speak about some of them in order to show what is common for them and what is different. If you don’t find a description of your favorite celebrity’s home, you can easily find it online – there is a lot of information available.

You should keep in mind that any famous mansion located in Miami and described in this review can easily be sold and become some other celebrity or even business executive’s property. 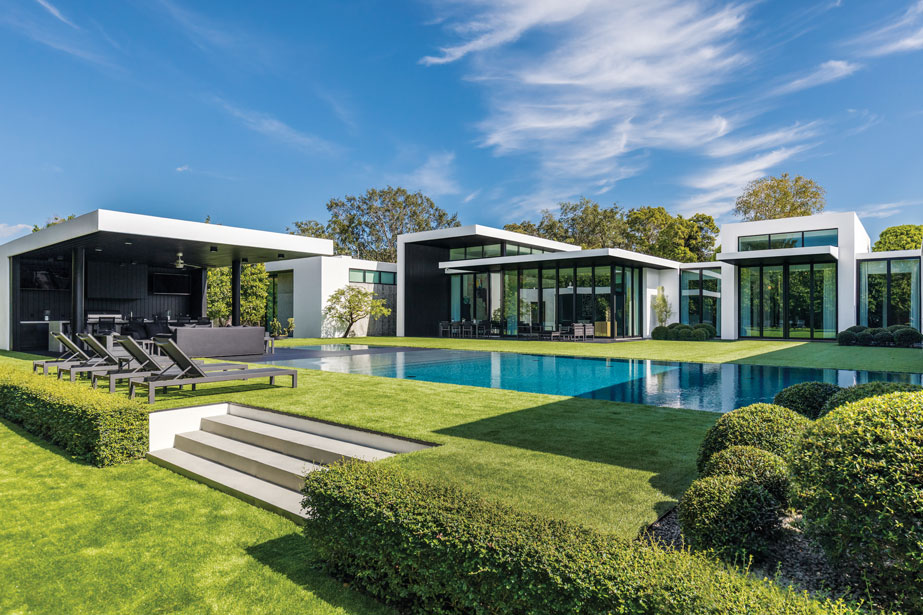 Alex Rodrigues has built a contemporary mansion in Coral Gables, which overlooks Biscayne Bay. He had searched for a peaceful place where he could spend time with his daughters.

The house takes 11,000 square feet and is presented with one floor, which makes modernist interiors more grounded. The interiors are also mostly monochromatic with some bright accents.

The house is a place where there has happened an explosion of creativity, but it is also perfect for gathering with all the amenities inside and in the courtyard. 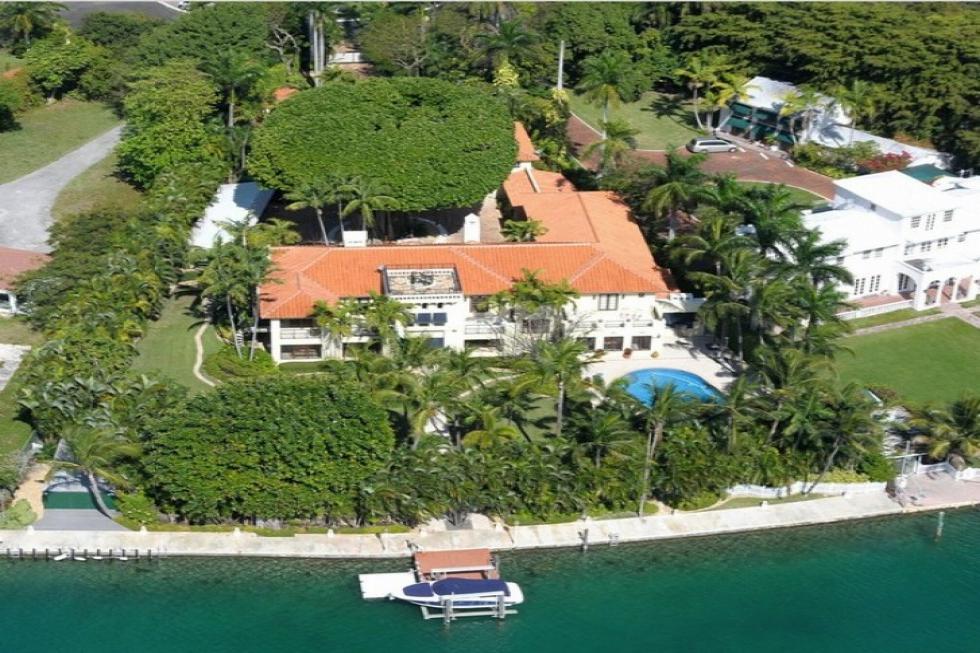 The house of Rosie O’Donnell is situated on man-made Star Island, which is one of the most attractive neighbourhoods in Miami. It was built in 1923 and has 11,000 square feet and 203 feet of bayfront.

Although the house is old enough, it has been renovated and acquires such things as a modern kitchen, new fireplaces, a private office and a terrace, a swimming pool and etc. 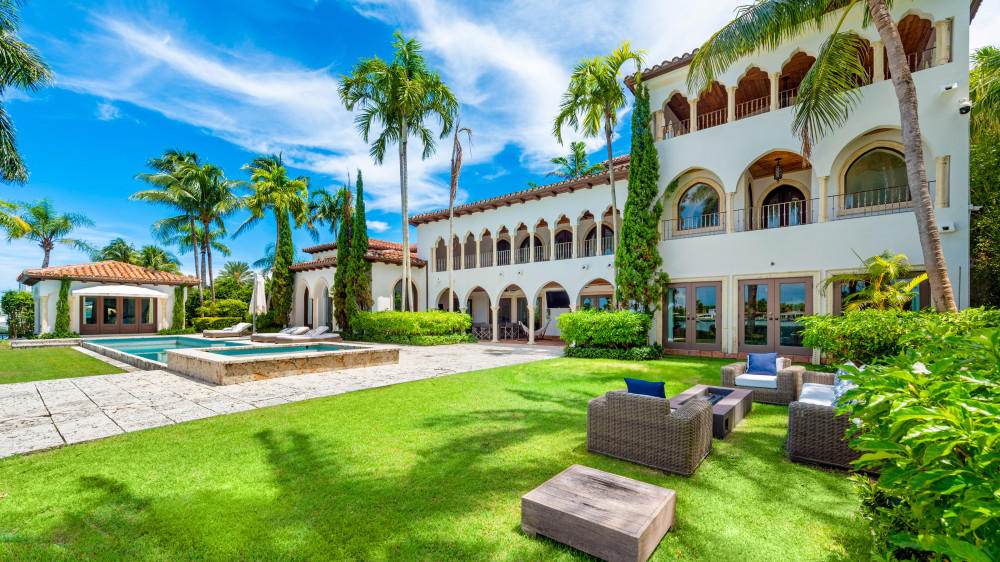 The house is situated on La Gorce Island, where there are only 59 residencies. The neighborhood is believed to be luxurious. The house of 11,500 square feet is in the center of courtyards, which are supplied with manicured lawns and fountains and a beautiful backyard with palms, a pool and a private dock with the direct access to the ocean.

The house is designed with amazing arches, loggias and windows and doorways inside. The spaces are giant and sunny everywhere, which is supported by white walls. The house has three floors with six bedrooms and six bathrooms. 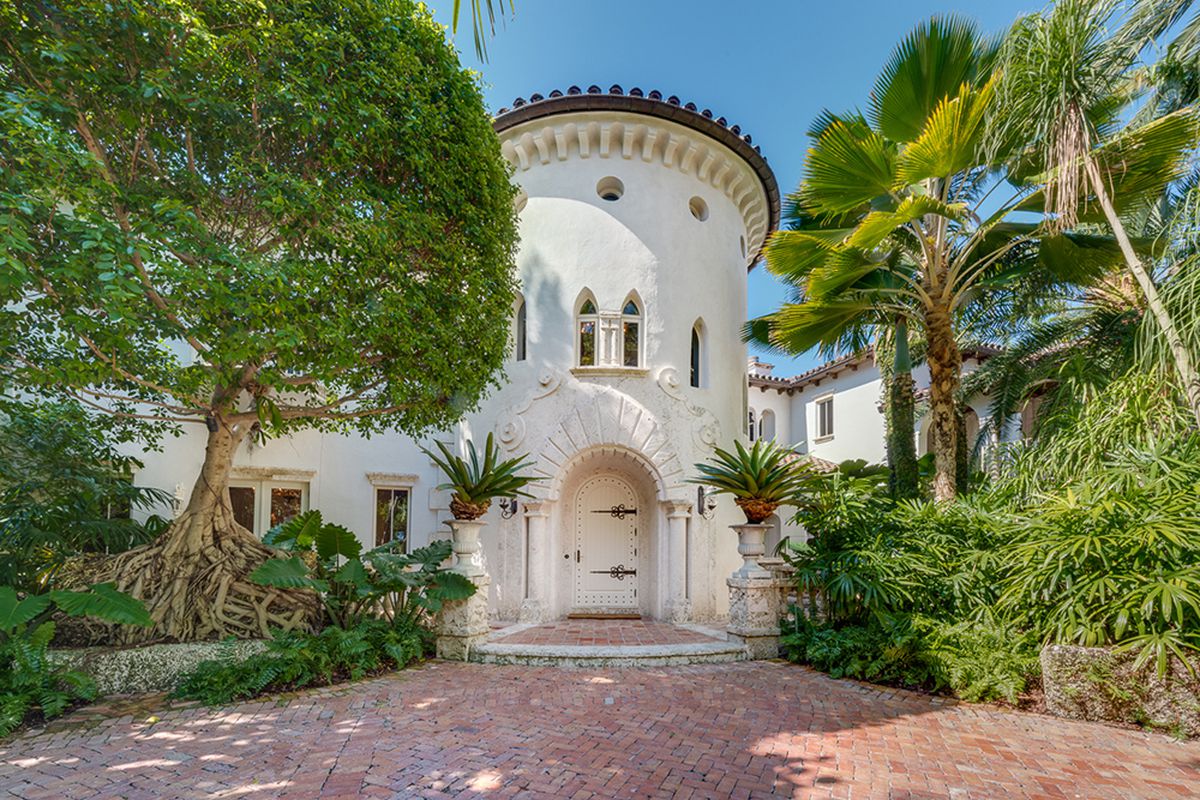 The former Lenny Kravitz residence has an uncommon style and was redesigned specially for the celebrity. The main color there is white and it’s decorated with eclectic furniture and some exciting structures.

The residence also obtains 100 feet of waterfront, and several windows of the house provide amazing views of Biscayne Bay. 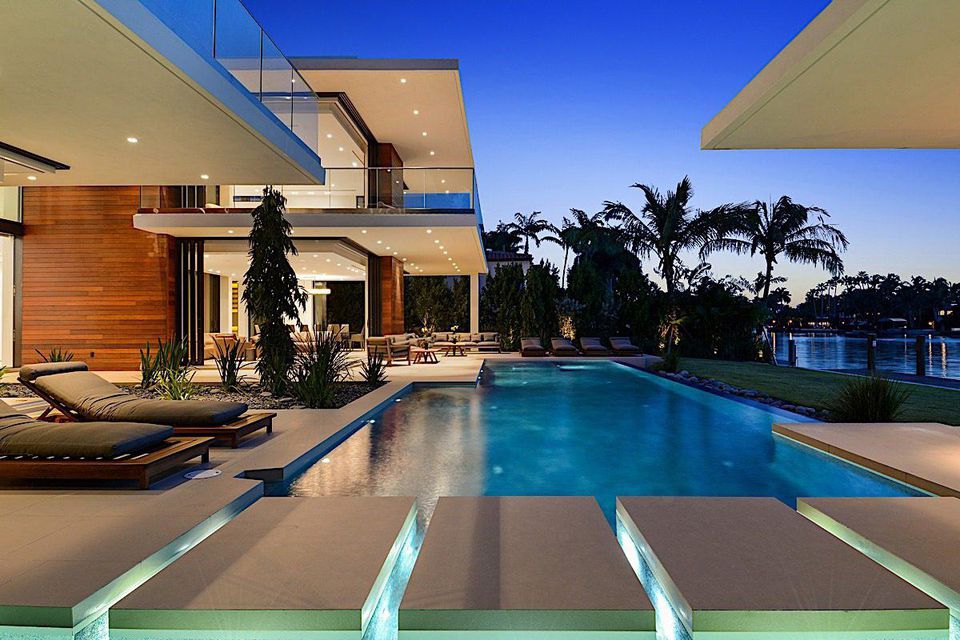 This house is situated on Allison Island, where you can get through the bridge. The island is located in the middle of the waterway to Biscayne Bay and the ocean.

The design of the house is projected in a way to make a feeling that it floats on water.

The house takes 10,472 square feet and offers seven bedrooms and ten bathrooms. Mostly the walls are moveable, so we can create the view without any walls at all.

The doors are mostly sliding and made of glass, so it seems that there are no doors at all, which is suitable for hot south Florida.

The house is supplied with the garage suite for three cars, a home theater, a fireplace, a pool house and many other creative features. 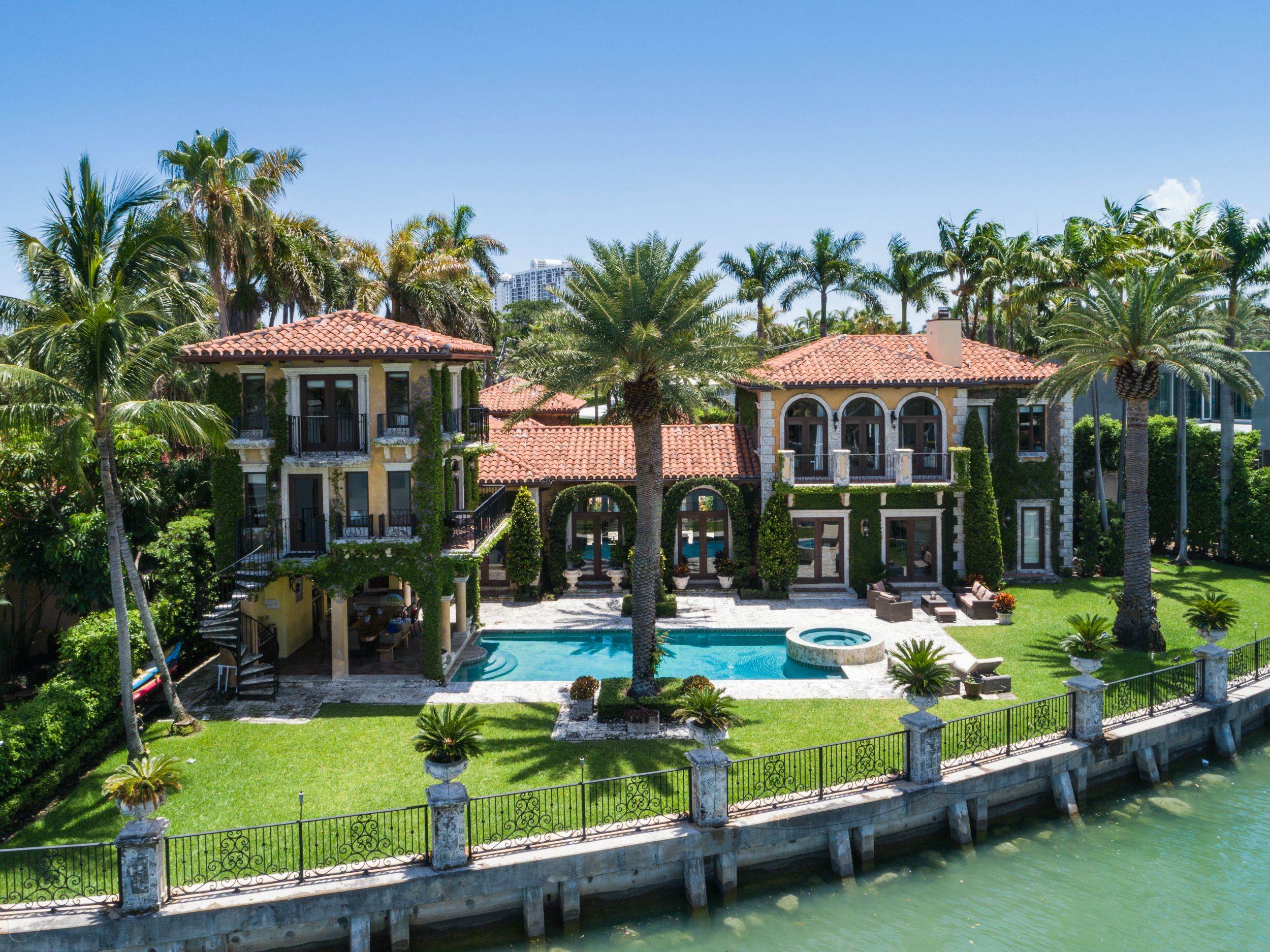 The house was built in 2000 and takes 19,281 square feet in the prestigious neighborhood called Sunset Island III. The mansion comprises eight bedrooms and the same quantity of bathrooms.

The main house itself takes 6,630 square feet and is decorated by amazing ivy. There is a lot of natural light in spacious rooms and halls of the mansion. The home is designed in a Spanish style.

The house also obtains 156 feet of water frontage and presents its dock where you can keep a long yacht.

Outdoors the visitor will enjoy a pool and spa supplied with an outdoor kitchen and a barbecue. Guests will also be happy to know that the territory of the mansion provides two guest houses. 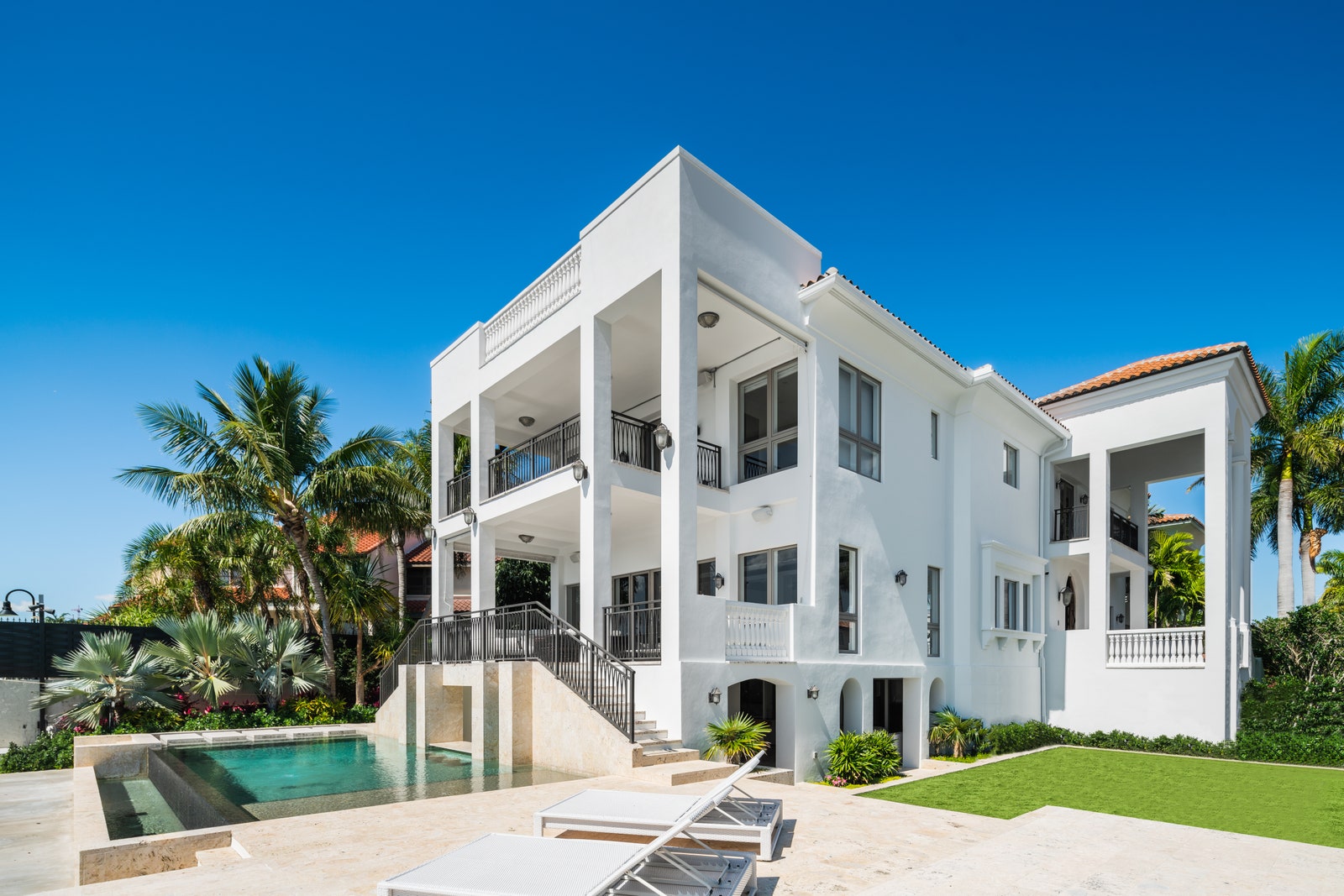 The house has a wonderful view on a bay in Coconut Grove. It acquires such marvelous features as a chef’s kitchen, a wine cellar, an office and others.

The house is designed in light colors and has glass doors, which are often not noticed. It is a contemporary building of three floors in 12,178 square feet, where there are six bedrooms and eight bathrooms. Apart from the living areas, the kitchen, the cellar and the office, the house also acquires a full gym and an amazing playroom.

The outdoors space is supplied with a summer kitchen, a pool and even a dock for a couple of yachts. There is also a guest house on the territory with one bedroom and one bathroom. 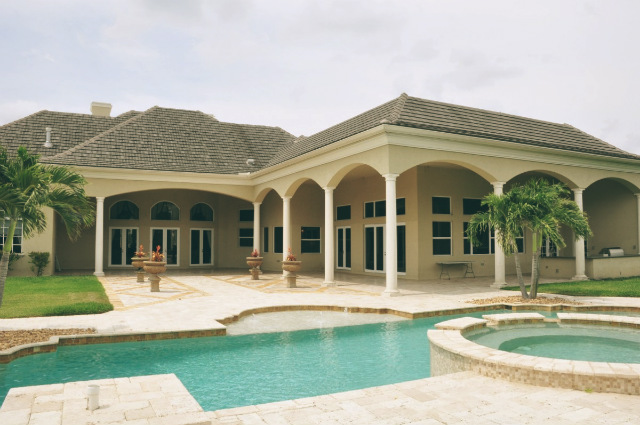 The house takes 13 square feet on the coast of a small river in Miami. The estate acquires six bedrooms, seven bathrooms, a spacious home theatre, a giant gym and a swimming pool in the backyard. The pool is close to a jacuzzi and an outdoor space with a built-in barbeque and bar.

The house is designed in a modern Mediterranean style and has a lot of space and high ceilings. There is also a lot of dark wood used in the interiors, which contrasts with the white color also implemented there.

In Florida most celebrity homes are situated in Miami because of its both central and coastal position, its convenience and – you can guess – its wonderful climate conditions.

Celebrity houses in Miami happen to be a special feature of the city. Everyone in the state, in the country and even in other countries wish just to have a look at how rich and famous people organize their living, how they choose their homes, how much money they spend on houses, and, of course, how they spend their free time, although they don’t have much of it.

Celebrity homes in Miami also reveal the architecture and design tendencies of nowadays as well as some previous decades since some houses were built years ago. The interiors are usually marvelous since they often result from the huge work of professional designers. We can find a lot of pictures and photos of such homes in the Internet as well as see their exterior with our own eyes – we don’t think that anyone of us is lucky enough to be invited to a celebrity’s house. And based on what we see we can develop our taste in design and architecture.

We have forgotten to mention that celebrity houses have become such a popular topic that any tourist can enjoy a celebrity house tour in Miami. Mostly the houses are shown from the street where they are located. Another tremendous opportunity is to take a boat tour around Miami coast and islands and to see celebrity homes from their coast side and even catch a glimpse of a celebrity spending their time near the pool or the barbeque.

VIDEO THAT WILL HELP YOU!

How To Build An Outdoor Kitchen With Metal Studs

How to Get Rid of Cockroaches in Kitchen Cabinets

How To Get Rid Of Ants In The Kitchen

How Much Does Bath Fitter Cost in 2021